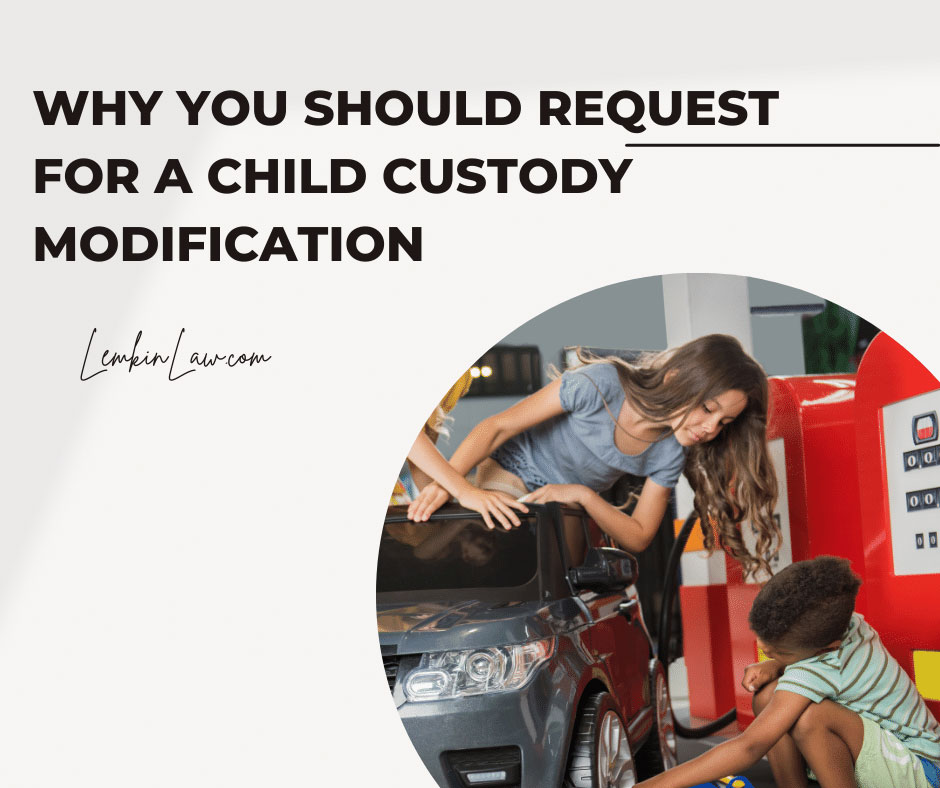 Why You Should Request for a Child Custody Modification

Court modifications regarding child custody are not only possible, they happen often. But the court needs good cause.

It’s not uncommon for an Orange County divorce mediation attorney to help a couple get through their divorce with a custody arrangement, even if the court ultimately decides custody. The reality is that life changes, and the original custody agreement may no longer work.

In certain cases, the court may consider modifying your current custody agreement regarding custody or support. Of course, it’s best to consult with an Orange County divorce attorney to ensure you have the best chance at getting the modification you need.

When To Request a Child Custody Modification

Typically, after parents separate, there are divorce proceedings that include decisions about child custody and support.

Children are entitled to the same level of support, even when their parents split. During the hearing, each parent provides evidence to show their ability to support the children with things like tax forms, pay stubs, and more.

The court will grant a specific support amount and put into action a plan for payment. A modification comes sometime after this. Courts don’t always like changing custody orders that seem to work for everyone.

Simply making things easier for the parents won’t trump what is best for the children. The court also doesn’t necessarily want to disrupt the way a child lives without good cause.

When Will A Court Agree To Change A Custody Arrangement

Just because a court doesn’t like to change what appears to be a good situation for a child, doesn’t mean they won’t do so with a good cause.

If you find that you need a child custody modification, make sure to consult with an Orange County divorce mediation attorney to be able to present the best case for your request.

Here are some of the most common reasons courts are known to adjust a custody arrangement:

When The Children Are in Danger

Since the court is most concerned with what is best for the children, any threat to the kids will catch the court’s attention.

If a child appears to be in any kind of danger, the court may take swift action. The court will consider several factors in these situations:

When One of the Parent Relocates

Sometimes one of the parents has to relocate because of work or other personal reasons. A court won’t automatically adapt the custody agreement just because someone moves to a distant location.

Before making any changes, the court has to evaluate several items:

When One of the Parents Breaks the Original Agreement

If one of the parents stops cooperating with the current agreement, the court may step in and make a change. This doesn’t apply to an occasional change or mishap.

When One of the Parents Die

If the parent who has sole custody or is the primary custodian dies, the court has to decide if the non-custodial parent can assume the full responsibility of the child, or if someone else needs to step in to help.

The decision is less based on if the non-custodial parent can handle being the full-time parent and more about what would cause less disruption to the child’s life. The court will also consider the following:

When The Child Has Different Needs

As children grow, their needs change. An infant certainly doesn’t have the same needs as a high school student. For example, a breast-feeding infant may need to spend more time with their mother than the father.

Part of a custody agreement deals with child support payments. Not only could a parent want to seek a change in physical custody, but they may want to adapt the support agreement as well.

Here are some of the most common reasons a court may consider altering support payments:

A Decrease in Income

If one parent loses their primary income due to a recession, etc.

The Child Has Additional Needs

A Substantial Increase in Income

Courts make support decisions based on what the paying parent is able to pay. If that person increases their income or receives a substantial inheritance, the court could decide they can afford to pay more.

Before filing for new custody or support arrangement, parents should try to work things out among each other. So long as both parties want what’s best for the child, it shouldn’t be too difficult to find an arrangement that works for everyone.

Of course, It’s not always easy to find an amicable solution between disgruntled ex-partners. Before going to court, it may even be beneficial to meet with an Orange County divorce mediation attorney to help resolve issues.

There are cases when taking the matter to court is the only way to solve issues. That’s when you need a professional and experienced Orange County divorce attorney on your side.

Going through it alone could mean not getting an agreement that works for you, or worse, puts your children in a difficult place.

If you need legal assistance in requesting a child custody modification, contact us at the Law Offices of Hollie A. Lemkin today.