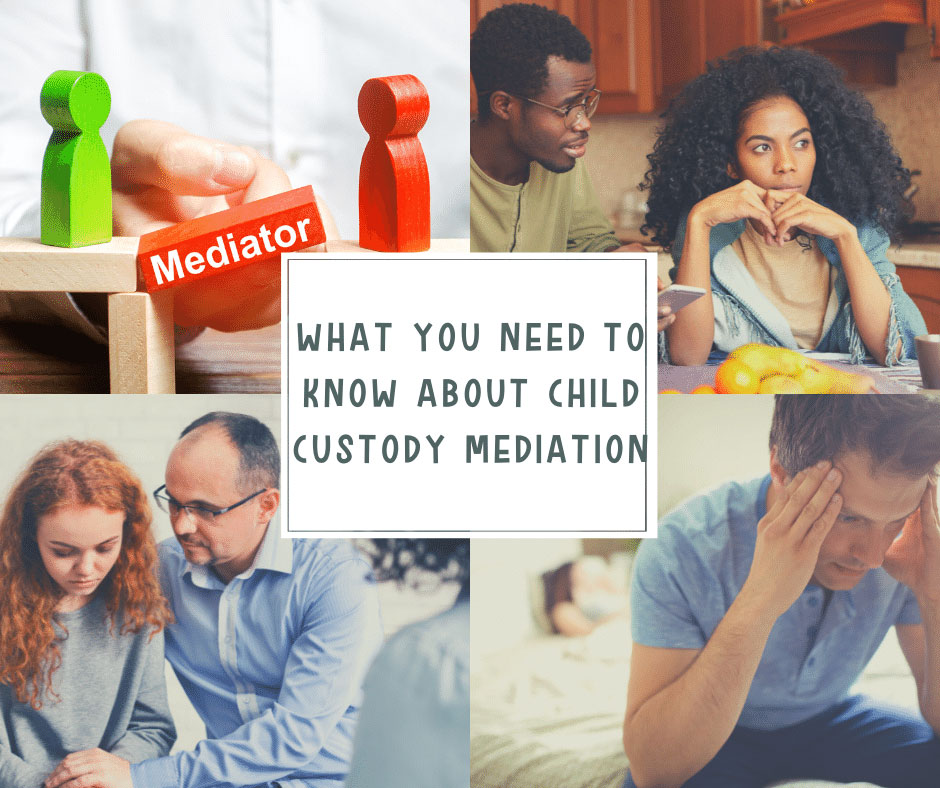 What You Need to Know About Child Custody Mediation

Child Custody is emotional and can be frustrating. Here’s what you want to know about custody mediation.

When a couple is going through a divorce, an Orange County child custody attorney can help spouses reach an agreement through the process of mediation. Unlike litigation, the parents, and not a judge, come to terms on child custody and other aspects of the divorce settlement.

In most cases, parents are much more satisfied with the outcome as they have reached a mutually beneficial agreement together.

How Does Child Custody Mediation Work?

Child custody mediation is a process in which divorcing parents work together to create a parenting plan for their children with the help of a neutral third-party mediator.

Instead of a judge ruling on custodial rights, through negotiations and compromise, both parents reach a decision that is in the best interests of the children.

Parents and the mediator meet together in sessions. The number of sessions varies based on the distance between what each parent wants and the amount of negotiations needed to reach a compromise and a settlement.

During mediation, the mediator does not give advice or side with one parent over the other. Instead, they direct the communication in a healthy and non-contentious manner.

Each participant speaks without interruption and treats the other with respect. Skilled mediators and an Orange County child custody attorney have studied effective communication skills and understand how to keep the discussion on-topic and the emotions at bay.

While a mediator does not offer advice, they can point out possible options that divorcing spouses may not have considered. They can also address concerns through the lens of applicable child custody laws.

Ultimately, all custody issues must be decided to keep the divorce settlement and child custody agreement out of the courts. This includes a parenting plan that may be quite structured.

These plans specify day-to-day custody as well as a visitation schedule that includes holidays, vacations, and other issues particular to a family.

There are several types of child custody, such as:

The goal of mediation is for parents to reach these decisions together with the help of a mediator and a child support lawyer Orange County.

What Are the Benefits of Child Custody Mediation?

Both parents and children benefit from keeping child custody decisions out of the courts. Here are just a few of the many reasons why:

How Can Parents Make the Most of the Mediation Process?

The mediation process can take weeks or months, depending on a couple’s ability to retain their focus and reach a mutual agreement. Both parties should consider the reasons behind their intentions before their first mediation session.

Is the best interest of their children the primary goal or has resentment and the need to punish the other parent colored their intent?

Bring documents that are vital to the decision-making process. These include the children’s and parent’s work, school, after school, and weekend activity schedules.

If a parent has any special requests, such as vacation time or a family gathering, be sure to write those down so that they can be addressed during mediation and included in the final parenting plan.

Arrive with an open mind and the goal of creating a parenting plan that is best for all concerned.

Can Volatile Relationships Find a Resolution Through Mediation?

While it may seem like you and your spouse are at such odds that mediation is impossible, it can work. As a child support lawyer Orange County, a certified mediator, and a family law specialist, we have years of experience working with high-conflict couples.

Skilled mediators know the tactics that diffuse conflict and escalating tensions. They are trained at keeping a couple focused on the tasks and decisions at hand.

Should the conflict be too great, mediation can be accomplished in separate rooms, with the mediator going back and forth between the two parents until an agreement is reached.

We are certified mediators and family law attorneys with over 18 years of experience. We understand the emotions involved in child custody proceedings and can help couples reach an agreement that is best for all concerned, particularly the children.