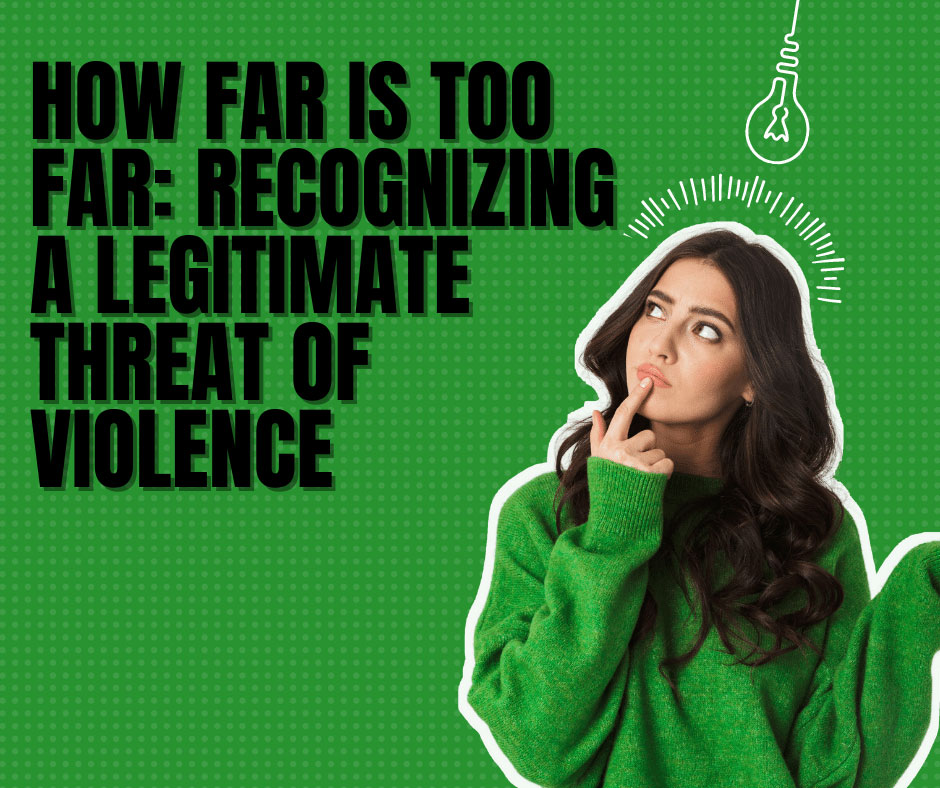 How Far is Too Far: Recognizing a Legitimate Threat of Violence

It can be hard to know what’s normal and what’s not. Here are some ways to see violence for what it is.

Every marriage has conflicts and most couples don’t run to an Orange County divorce attorney just because they disagree about the proper way to squeeze toothpaste out of the tube — of course, conflict can progress into something more serious.

Sadly, uncountable numbers of spouses end up in an abusive or violent relationship, even if they don’t fully recognize it. It’s in these situations that working with an Orange County domestic violence lawyer is critical.

Even if you’re not considering an actual divorce, it’s crucial to meet with a legal professional that can help you understand your rights and options to remain safe.

Here are some things to consider when it comes to identifying the potential for violence in a marriage. If you find yourself in an unsafe situation, call the police right away. It’s also worth consulting with an Orange County divorce attorney to help plan your next steps.

Domestic Violence is on the Rise

Studies show that there is an increase in domestic violence around the world. Some people blame the current unrest around the globe, while others think the number of cases is going up because more people are coming forward with their stories.

It’s a common misconception that domestic violence must be physical in nature. Believing this false definition leads to a number of people to be in a violent situation without even realizing it.

California recognizes domestic violence as abuse or threats of harm between people in an intimate relationship. These relationships include married couples, dating partners, and people who have a child together.

Domestic violence can happen even if those involved don’t live together. Abuse can take many forms. While physical abuse is often the easiest to identify, it’s not the only kind. It can be verbal, emotional, or even psychological.

There are several forms of abuse and some of these are:

If you believe that your partner is abusive towards you, do not hesitate to contact an Orange County divorce mediation attorney right away. These professionals can offer advice on how to ensure you remain safe and know all of your options.

Realizing that you’re in an abusive relationship or that there is potential for violence is no easy task. People who are directly involved in the situation can easily miss some of the key giveaways that they are in danger.

Abusive relationships always involve some kind of imbalance of power and control. The abuser uses different acts of intimidation to control their partner. It typically starts small and builds over time.

In many cases, it builds in a way that the abused person doesn’t realize just how bad it has become.

Here are some of the signs you can look for to identify the potential or reality of domestic violence in your relationship:

If you’re not sure if actions in your relationship fall under the definition of abuse, you can schedule a consultation with an Orange County domestic violence attorney. These lawyers will help you understand the extent of your situation.

Many victims of abuse end up believing that they are to blame for what’s happening.

This is often due to the psychological element of abuse. Instead of seeking help, the victim focuses inward, believing they deserve the violence.

Instead of getting caught in a head game, here are some signs you can look for that you’re involved in psychological warfare:

Don’t get caught playing the blame game with an abusive partner. Schedule a meeting with an Orange County divorce mediation attorney right away.

What About the Children?

Domestic violence can often begin or intensify when children are involved. If the abused is pregnant, the violence or stress involved can impact the mother or unborn baby.

Even if the children aren’t abused, giving witness to domestic violence can play a negative role in how they grow up.

Many partners worry that coming forward will risk their relationship with the children. Protecting yourself and your family is the most essential step. Contact an Orange County divorce attorney to learn about all of the possible outcomes of your situation.

Break the Cycle Before it’s too Late

An abusive relationship often follows a cycle. For example, it might start with a threat of violence, followed by an actual act of abuse. The abuser apologizes and promises to change. They may offer gifts or be extra nice for a while. Then the cycle repeats.

Identifying an abusive relationship is the primary step in breaking the cycle. The most practical thing you can do is contact an Orange County divorce attorney to learn your options.

The longer you stay in an abusive relationship, the more significant toll it will take your life. It can even result in extreme acts of violence that can result in disability or even death.

No one deserves to be abused — take the step and contact us at Lemkin Law and meet with our Orange County domestic violence attorney today.