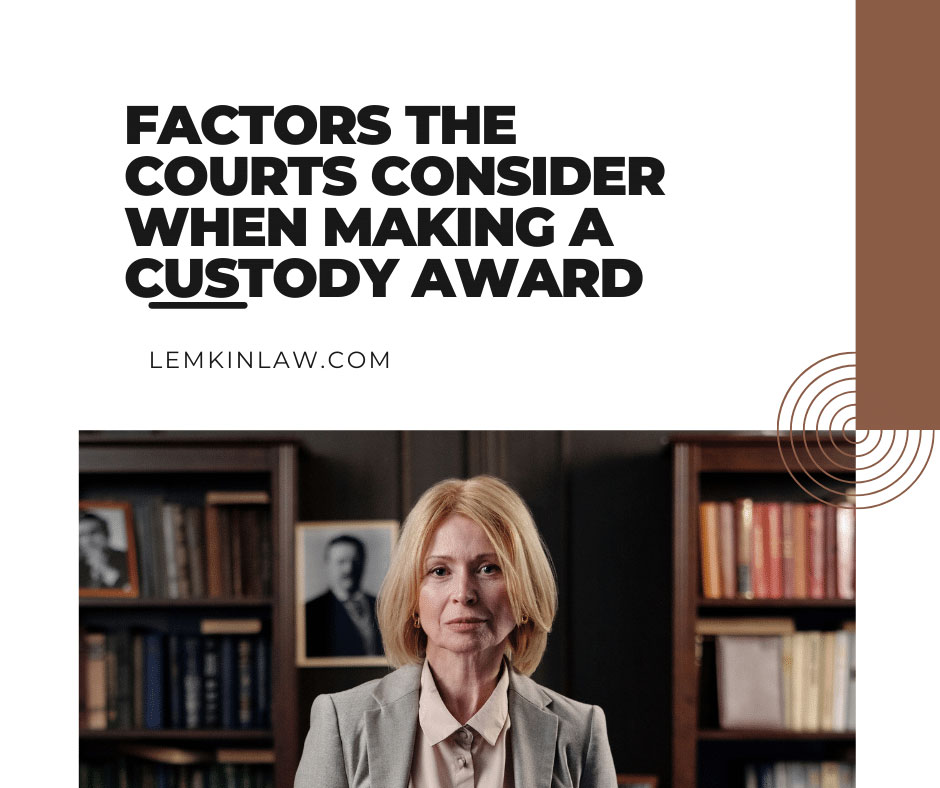 Factors the Courts Consider When Making a Custody Award

Who Gets the Kids? Is it the same for every case?

Everyone knows that going through a divorce is considered a predicament event in one’s life, especially when children are involved. That’s why it behooves you to work with an Orange County child custody attorney.

Ultimately, courts are going to consider what is best for the children involved, and at the same time, you’ll want to know what to expect.

Whether you’re getting ready to file for a divorce or you’re already in the middle of one, here are some things that courts consider when making custody awards.

What Exactly is Custody?

Your Orange County divorce attorney will work with you to create a strategy towards the best custody arrangement. Of course, the word “custody” has many different iterations. Before you get involved in a legal battle for custody, it’s crucial that you know what it is.

Legal custody is when someone has the legal authority to make legal decisions for and on behalf of a child — decisions that fall under this umbrella cover everything from where kids go to school, what kind of religious service they attend, non-emergency medical decisions, and more.

Sole Legal Custody is when only a single parent has the appropriate authority to make these kinds of decisions. The other parent can absolutely still be involved in the children’s lives, but this parent does not have the ability to make major and legal decisions.

Joint Legal Custody is when both parents have the proper authority to make legal decisions. While it would be ideal for divorced parents to work together to make critical decisions for the children, that’s not always the case. Parents can share legal custody without needing to share physical custody.

Sole Physical Custody is when the children live in a single location. The other parent may be given visitation rights, including sleepovers or short trips.

Joint Physical Custody is often called shared custody, shared parenting, dual residence, or another name. This kind of arrangement can take a number of forms, but the idea is that both parents get time with the children. The goal is often to have the children split equal time with each parent — there can be variations on how much time children live with each parent depending on the outcome of the case.

Bird’s Nest Custody is when the children remain in a single location, and the parents rotate in and out. This is often seen as a way to keep a regular routine for children, while still allowing each parent to live with the kids. This is a rarer form of custody, but it’s still an option in some cases.

Who Gets the Kids?

One of the most difficult questions to answer when it comes to a divorce is what happens to the children.

The days of just assuming that the children stay with mom are over. The court looks at what is the best option to give the children their best lives, which includes spending time with both parents.

While every parent should also want what’s best for their kids, it often comes down to what the judge decides.

Assuming neither parent poses a threat to the children, here are some of the most common elements used to determine custody:

The court may take other elements into consideration as well. Talk to your Orange County divorce attorney to examine your specific situation to better understand your options.

What About Child Support?

Child support is meant to ensure that caregivers are able to pay for the expenses associated with raising children.

Children should have access to the same kind of financial support they would have had there not been a divorce. Courts try to be fair when determining the support amount.

Your child support lawyer in Orange County works to make sure support payments are sufficient but not overly burdensome.

Courts use something like a formula to create the right amount of support payments. Check with your Orange County child support lawyer to get an accurate estimate. Here are just some of the things the courts will take into consideration:

Each parent will have to turn in items like W2s, tax returns, pay stubs, and anything else that supports their incomes.

Having dependents from other relationships will also impact the judge’s decision regarding support.

The courts look at how much time children spend with each parent. The more time each parent spends with the children, the lower support payments should be.

The court also looks at who is paying for the majority of the children’s expenses: healthcare, childcare, school, etc.

How the court determines your children’s custody may be one of the most critical decisions of your divorce. So, instead of worrying about what will happen to your kids, contact our Orange County divorce attorney at Lemkin Law today.