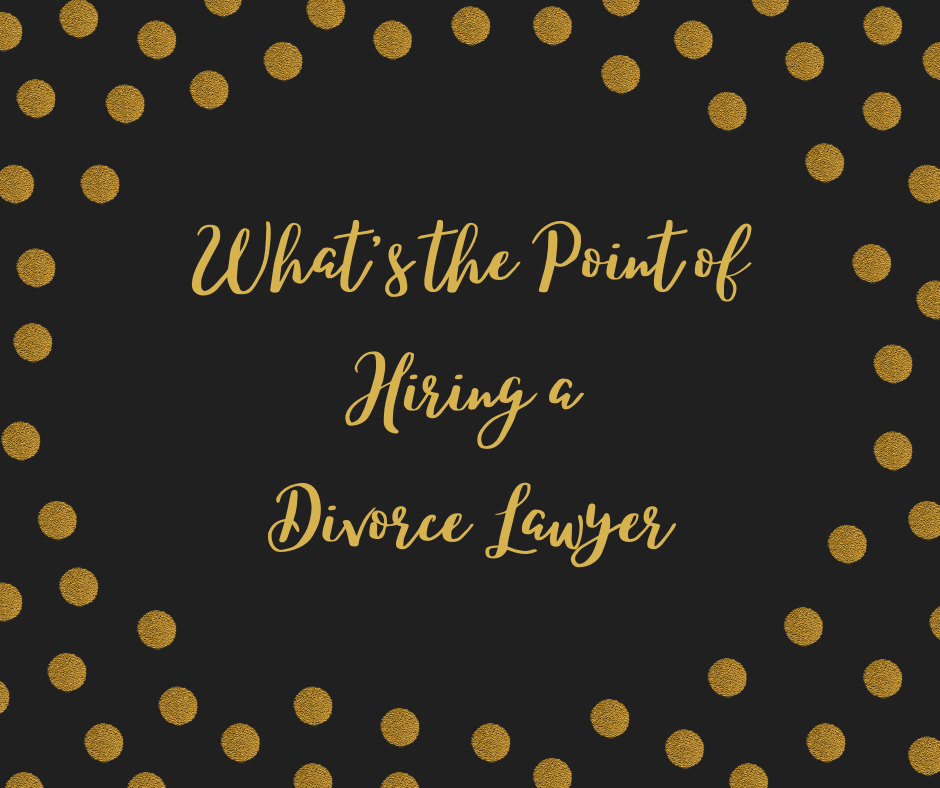 Divorce Lawyer – Is it Worth it?

Choosing the right divorce lawyer will have a profound impact on your family’s future. Consider all your options!

Whether you have been married for 2 years or 2 decades, you might be asking yourself if talking to a divorce lawyer is the right move. Maybe you are still on the fence about getting divorced or even completely against the idea. But there are a few tried and true signals that it is time to sit down and talk:

What are you really paying for when you hire a divorce attorney?

The biggest thing you are paying for is experience. A competent divorce attorney will have case law and understand the rules. An experienced attorney will have 100s of cases to draw from. They’ve been through the spouse hiding assets overseas. They’ve been through the spouse that manipulates their partner to alleviate spousal support. So many stories of unique divorces. They know what to expect and more importantly, they are prepared for the unexpected.

The second thing you are paying for is their network. Someone like Hollie Lemkin who has been exclusively practicing Family Law the last 20 years knows the people you need to win your case. She has experts like forensic accountants, psychiatrists, family docters and more. These are experts she knows and trusts. People she has used in previous cases and knows they are great in the courtroom.

Third, a much-needed steady hand. Thousands of divorces start amicable and blow up. It’s emotional and heartwrenching. And for those people that have lots of assets and children, it can be the worst period of their entire lives. Humans act out. Humans get in their own way. When you hire a truly good divorce attorney, that lawyer will help guide you through the process. And most importantly, help you avoid pitfalls that will only make the process harder.

Lastly, a moral compass. It might sound funny to think of a lawyer as a moral compass but if you hire the right one, they truly can be. Emotions run high, and you start seeing red. You will be tempted to hide assets or hit below the belt to get your way. The right attorney will help keep you from playing dirty. They will use their experience and knowledge to win with the best legal strategies. Strategies that mean you can always look your kids in the eye.

How Much Can a Divorce Lawyer Cost?

The short answer is however much someone is willing to pay. There is no legal limit to how much a lawyer can charge for any services. However, the court does not look kindly on lawyers that bloat their invoices.

It’s been said that a “typical” US divorce costs roughly 15k per person. But it’s difficult to nail down what is typical when divorces are so unique. And even average hourly rates for lawyers have a spectrum within the same zip code let alone throughout the United States.

But it’s important to note that lawyers can’t surprise you with charges. As members of any state bar (by the way, always check that your potential lawyer is a active member of your state’s bar association) they are held to certain ethical requirements. One of those is ethical billing practices. In other words, they have to tell you up front how their billing works. If you call for a consultation, they have to tell you how much the consultation is going to cost before they can charge you for it. You won’t talk for an hour and then at the end be told the price. If that happens, you need to file a complaint with that state’s bar association immediately.

Lawyers are allowed to bill in all sorts of ways. The most common arrangement is you pay a retainer upfront and then the work the lawyer does gets subtracted from that. Usually, after the initial consultation, you are presented with an “engagement letter” or “retainer agreement” where the lawyer lays out how much the retainer is, their different hourly rates, how they calculate hourly rates, etc. For example, you will typically pay less per hour for paralegal work vs the lawyer him/herself doing the work. You will typically pay less for drive time than in-court time, etc. But the bottom line is, nothing is a suprise and your lawyer is obligated to keep you apprised of your charges along the way. Now, you won’t give approval for every little thing nor would you want to, but the purpose of the engagement letter is to clear up any confusion regarding how this specific lawyer will bill you.

Can we avoid a legal fees by using mediation?

If your case is suitable for mediation, the cost can be lowered considerably. Now the State Bar of California holds the position that mediation is a form of law and so therefore only active members of the CA Bar can be mediators. So you will still need an attorney of some capacity but it’s not uncommon that the divorce lawyer you would have hired has experience as a divorce mediator.

Can my divorce lawyer protect my 401k?

Yes, by knowing the rules and helping negotiate on your behalf. CA is a community property state which means usually the 401k of either spouse will be split evenly. Everything we do here at Lemkin Law is above board so we will not lead you down the wrong path of withdrawing funds early. Some people do this thinking it is the only way to protect their assets. When you have a lawyer like Hollie Lemkin, she will show you how to stay in the court’s good graces. And if you are on the other side, not sure if your spouse has hidden accounts, our investigative team will not only find all the money, we will make sure that the court sees this underhanded act for exactly what it is.

In 1970 California became the first state to utilize the concept of no-fault divorce. Before that time not only did you have to have a legal reason to get divorced but that reason had to be backed up by evidence. As you can imagine, this required a lot of unfortunate and humiliating court battles that are now, no longer legally necessary.

Residency Requirements. Here’s a map of residency requirements for all US States:

In California, one spouse needs to have been a resident for 6 months and specifically 3 months of that time in the county that the divorce is being petitioned.

It’s common knowledge that California is a Community Property state. However, what some people don’t know is how individual items are treated. Property owned before the marriage is separate unless it has been commingled along the way. A great example is if a car is purchased by one partner but then both spouses contribute to the payments. In this situation, the divorce lawyers for both parties will provide arguments about the true ownership of the vehicle.

And now that we are living in a gig economy with people working and traveling more often, it’s important to note that California will look at all assets as community property, not just those things acquired in the state of California. One notable outlier is inheritance. Unless specifically bequeathed to both parties, inheritance is not typically split or used in the balance equation at all.

Divorce Lawyer – is it worth it?

The short answer: yes. The choices made during a divorce have long-lasting consequences. For both you and your entire family. Laws change and in order to have the best possible outcome, you need someone with a firm grasp of all the nuances. It’s undoubtedly a difficult period and the best way to protect yourself is to hire an experienced, knowledgeable divorce lawyer.