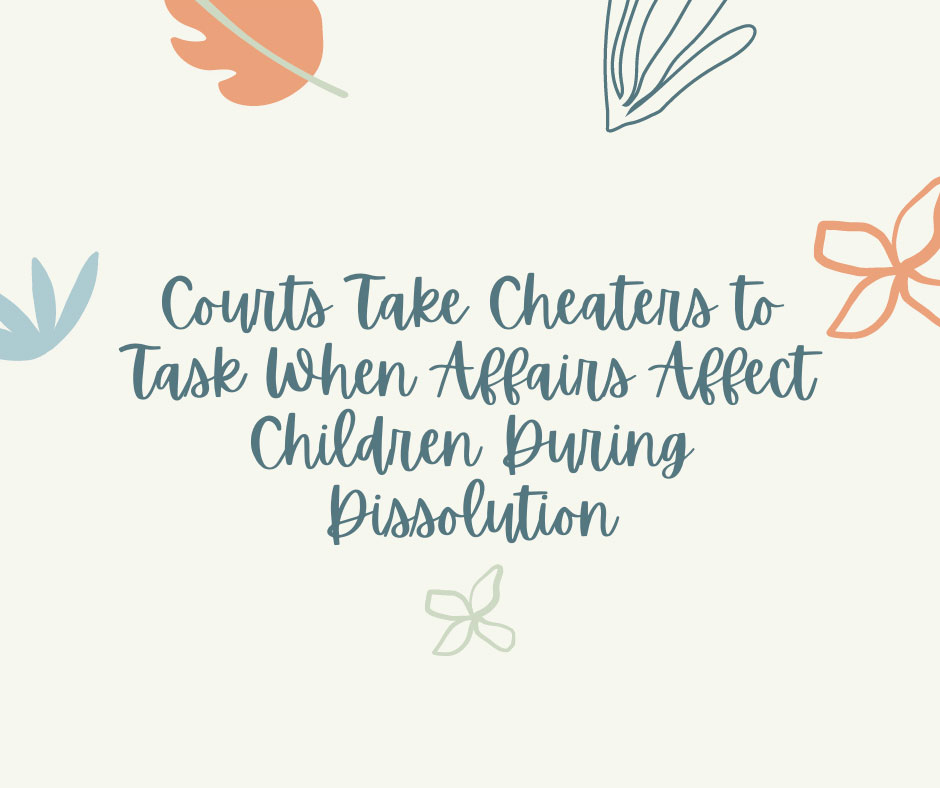 The courts will consider how you introduce your minor children to your new love interest.

Fresh from what one online entertainment news site called the “summer of heartbreak” involving celebrity breakups, divorce remains an almost daily news item. After all, when one cheating spouse forces the other to make the gut-wrenching decision to file for dissolution, when minor children are affected, and when the pain of broken trust is insurmountable, you want to rely on a judge to mete out deserved punishment. And while that makes sense psychologically speaking, divorce courts don’t operate that way. In California, for example, one spouse’s affair has an almost negligible impact on the divorce proceeding. Any party in a marriage can file for dissolution of marriage for any reason — or for no reason. The fact that one party no longer wishes to be married is sufficient grounds to file for dissolution. The judge has neither the time nor interest to hear about marital infidelity.

It is usually presumed that the dissolution is the result of a disagreement about money, sex, or infidelity – the three main reasons people get divorced in the United States. Currently, state filings for dissolution average between 55 and 60 percent of marriages. In California, it is approximately 55 percent.The court’s major concern – and it is here that courts have jurisdiction to consider evidence about infidelity — is how minor children may react to the dissolution and the introduction of a third-party in an inappropriate manner that may harm minor children psychologically, impact their development or make their acceptance of their parents’ parting more painful than it would be otherwise. As part of their duty to adjudicate according to the best interests of the children, judges may restrict an unfaithful spouse’s desire to introduce children to a potential stepparent until a psychologist evaluates the children’s ability to handle the information.

It should be obvious that children don’t want divorce. Children love both parents and do not want to meet the “replacement parent.” They prefer parents stay together. The general rule of thumb is that divorcing parents should wait a year after filing to introduce their children to a potential stepparent. Even at that, the introduction must be thoughtful and deliberate, with the parent taking care in how the introduction is made. It is important to set the right tone for the parent’s relationship with that “potential” stepparent. A simple introduction of the fact that this new individual in their lives is a “friend” of the parent is the easier way to ultimately transition the children into the new relationship.

All this doesn’t mean, however, that subscribers to Ashley Madison and similar websites are off the hook when it comes to infidelity and divorce. Parties who use websites to engage in online dating, physical dating, or a flirtatious e-mail relationship are playing with fire. Ask any family lawyer, infidelity will cause a marriage to fall apart faster than even arguments about money. Courts may be ambivalent about a divorcing spouse’s extra-marital love life, but they do take great interest in soon-to-be ex-spouses’ attitudes toward each other and any minor children. In short, they care about a party’s credibility. They care about the effect infidelity has on a spouse and minor children and the tone an affair can create surrounding the dissolution process.

Hollie A. Lemkin is an Orange County, California, family lawyer. Her practice also includes all aspects of marital dissolution, including spousal and child support, parenting plans, post-judgment modifications, and move-aways/relocation challenges; paternity; domestic violence; and same-sex marriage issues. She has earned the Certified Family Law Specialist (CFLS) designation, the highest level of legal competence in her field that the State Bar of California confers. Lemkin’s background as a corporate business executive taught her the skills necessary to negotiate exemplary marital settlements for her clients. For more information, go to Law Offices of Hollie A. Lemkin.