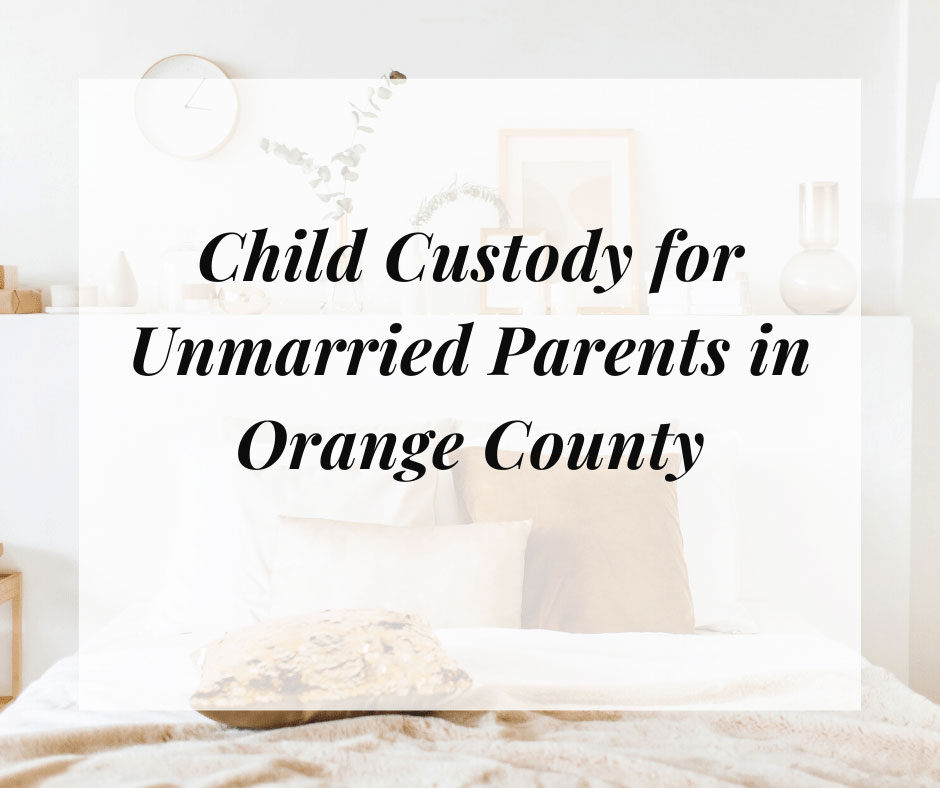 California is very clear about parents of children. The first step is paternity. This post covers the rest.

For couples that are separating, determining child custody and visitation rights can be one of the most heartbreaking and traumatic undertakings for both parents and children. If a couple is unmarried when this occurs, the confusion and uncertainty only add to the emotional challenges. Therefore, to make the process easier, it is best to work with an Orange County child custody attorney.

California law is very clear about who is considered the parent and what rights both parties are entitled to. Unfortunately, an unmarried couple is viewed very differently from a married couple when it comes to the rights of the parents in relation to the child.

Let’s take a look at what the law states and what this means for you and your loved ones.

How do you Establish Paternity in California?

The Superior Court of California, County of Orange, has ruled the following:

If you were not married at the time the child was born, the Court cannot make any orders for custody, visitation, or support until paternity is established.

The only way to establish paternity is if both parents signed a Declaration of Paternity form, CS 909, in the hospital when the child was born.

In California, this is the only way that an unmarried father can be named on the child’s birth certificate.

If this did not occur, you have two options:

What Happens When You Settle a Paternity Case in Court?

If one of the parties is unable or refuses to sign the required form, the remaining option will be to turn to the courts.

This may be the father who is looking to establish parentage for custody or visitation rights or the mother who is filing a paternity lawsuit because the father is denying parentage, and she is seeking support.

Once the Court has intervened, the process can be long and arduous.

Most cases include ordering a DNA paternity test for the father. This genetic test is extremely reliable with a 99.9 percent accuracy rate.

A  case management conference, pre-trial conference, and, if the case has not been settled, the final hearing or trial are all possible steps of a paternity case that has gone to court.

What if Paternity is not Established?

If paternity has not been established, the father has no rights as far as the courts are concerned. This means that, not only will the father have no say in how the child is raised and where they will live, he also has no rights to visitation.

Because he is not considered the legal father, he will also not have any obligations toward the child. This includes the payment of child support; helping with medical bills, insurance, and other expenses; and any additional costs associated with child-rearing such as child care or school funds.

If you are an unmarried father who has yet to establish paternity, and you are seeking custody of any kind, be sure to contact an Orange County child custody attorney immediately. If the mother and child move before you take action, you may be required to establish paternity in the state that they have moved to.

What Happens After Paternity is Established?

Once paternity is established, the father has the same rights as the mother in terms of child custody. At this point, the mother cannot move away with the child if the father objects, without the approval of the court.

There are two types of custody under consideration. First is legal custody, it gives a parent the right to make decisions about a child’s education, safety, health, and welfare. Second, is physical custody, that determines where the child will live.

Joint legal custody means that both parents have equal say in regards to decisions about schooling, religion, and medical care.

Joint physical custody, on the other hand, means that the child will spend substantial time living with both parents.

Should one parent receive sole legal and primary physical custody, the other would, in most cases, still be awarded visitation rights.

In California, it is the public policy of the state that the child will have frequent and continuing contact with both parents. Unless such contact would not be in the best interests of the child, such as in the case of child abuse or domestic violence.

The court will also consider the level of stability and reliability of a parent, and who has been the primary child caregiver to date.

If possible, we highly recommend mediation in order to come up with an amicable solution. Often, it is preferred that the child stays out of legal proceedings where the court will decide what is in his best interest.

If an agreement can be reached, a parenting plan is created. In addition to custody and visitation agreements, this detailed document may include where the children will go to school, the religion they will be raised in, and if parents have the right to call their children when they are being cared for by the other parent.

If, however, you are unable to reach an agreement, our Orange County child custody attorney will fight for your child’s well-being and represent you with the argument that your wishes are in his best interest.

One of the first actions is to file a petition with the court. This document states a parent’s beliefs regarding what the amount of child support and custody arrangements should be.

The initial hearing will put a temporary arrangement in place. From this point forward, either an agreement can be reached or the case will go to trial.

If you find yourself in a child custody dispute, contact our Orange County child custody attorney. It’s crucial to have a counsel that understands the laws where you reside and the best solutions to conflict.

Not only are we certified family law specialists with extensive experience in trial cases, but we are also mediators that can help you resolve disagreements and enable an amicable settlement out of court.

Contact us at the Law Offices of Hollie A. Lemkin today.