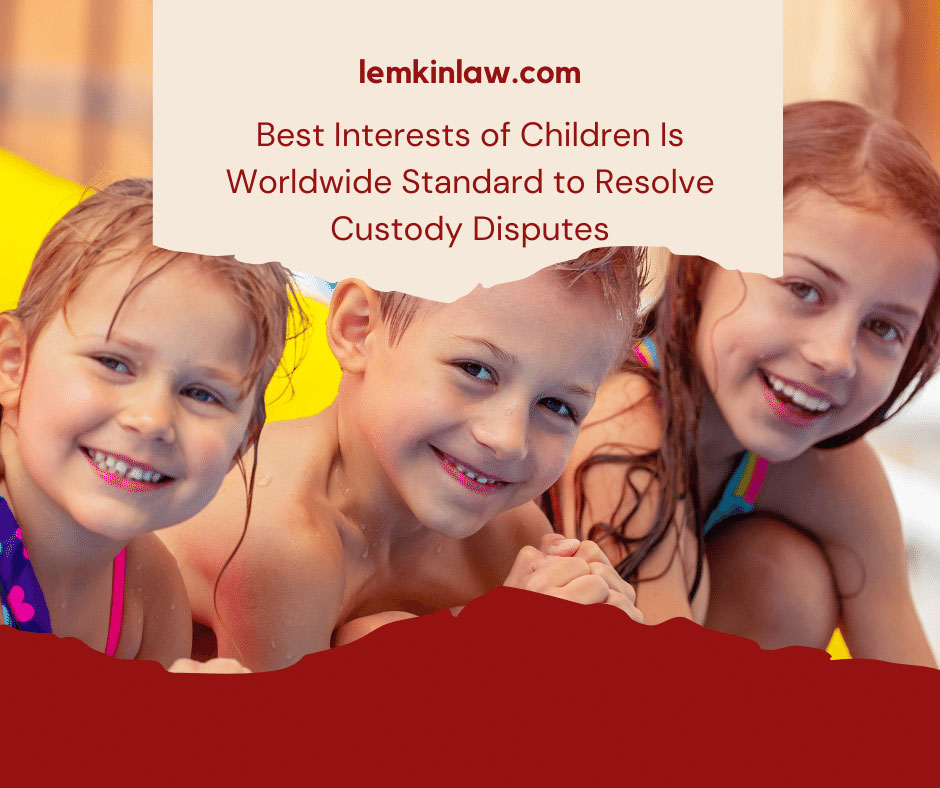 Nationality and Parent’s Tears Notwithstanding, Courts Relentless to Protect Minors

Not so long ago, the world seemed a very large place, and we all appeared very different from one another. With respect to the standards and practices of Family Law, however, the world is fast becoming a very small, homogenized setting.

As recently as August 2015, actress Kelly Rutherford and her German-born ex-husband Daniel Giersch’s custody dispute about their two minor children landed in a U.S. court. That court ruled that the children must return to Monaco for the school year after a summer spent with their mother in the United States. Turning to the court of public opinion via the media, Rutherford cried that because the children are U.S. citizens the Family Law judge could not order her to return them to Europe, reported MSNBC.Many parents involved in international custody disputes similar to Rutherford’s are equally unclear about important concepts surrounding the custody of minor children, regardless of whether the venue is Hollywood or Monaco. The children’s best interests always take precedence over their nationality and over where the parents are fighting the custody battle. In making custody orders, a Family Law judge’s paramount and primary consideration is the children’s best interests, and rightly so.

In Rutherford’s case, to prevail she will need to put on a strong, solid showing that the children’s best interests are to remain in the United States. Her evidence would include, but is not limited to, their deep connections with friends and family in the United States, their secure bond with her, the amount of their time in school in the United States, and how a forced move to Europe would disrupt their connection to their supportive U.S. community – as opposed to the lack of or inferiority of any of those items in the community and home that their father has established in Monaco. This standard does not differ, whether the battle is being fought from country to country or from state to state. The children’s best interests are always the highest priority.

When U.S. cases are litigated across state lines, the courts are tasked with creating a custody/visitation order that ensures the children’s best interests are the overriding consideration. Fighting for custody across country borders is no different than fighting the battle within that country. And the children’s nationality is of little value in the discussion of what is in the children’s best interests. What is of primary importance is how to best provide for the children so that they grow up to be happy, healthy individuals with a solid bond with both parents. Fighting about nationality will not achieve that goal, nor will assuming that a U.S. judge is obligated to rule in favor of U.S. custody.

Many people now marry across culture and nationality boundaries. When they divorce, they are legitimately concerned about what could happen when a minor child visits a parent in another country. In particular, they are concerned about childhood abduction, the best interests of their children, and what can be done if the other parent does not return the children.

To protect their children’s interests, custodial parents should register their custody and visitation orders in the courts and in the proper jurisdiction where the other parent resides and where the children may be visiting. Should things go wrong, the custodial parent may always make application to The Hague to have their custody and visitation orders enforced. The Hague Convention is an international tribunal that, among other issues, hears custody cases for Hague Convention country residents when a custody dispute (including child abduction) arises between residents of two different countries.

If the non-custodial parent resides in the Middle East, where none of the countries except for Israel accept or have signed onto the Hague Convention for the protection against childhood abduction, the custodial parent may want to seek help from a lawyer who specifically practices in the area of international custody and visitation. Crafting an order specifically anticipating and addressing the difficulties that could result from an abduction of children visiting a parent in a country not covered by the Hague Convention can help alleviate some concerns.

In the United States, authority regarding child custody and visitation, child support, spousal support and property division is governed on a state-by-state basis. The federal government has mandated that each state legislate a child-support program and method of ordering child support. However, that creation and the decision about how their system will be designed and operated is left to the states. Surprisingly, marital dissolution or divorce laws do not differ much state to state. The basic principle of best interests of the child are routinely followed by every state, regardless of the specific language of each of their laws and their procedural code provisions.

Fighting a custody battle across state lines in the final analysis is no different than fighting a battle from the United States to Europe or an Asian country or South America. Children’s needs do not account for state or international boundaries. They only want to be able to have contact with both parents on a basis that makes them feel connected with the two people they care about most. Regardless, ensuring that the children have equal access and contact with each parent is ultimately what is in the children’s best interests. It should be the goal of both parents and their counsel to see that this happens. Our children truly are the future of our world. Ensuring that they receive the best possible home life and contact with both parents is the best way we have to ensure that our children will grow up to be kind, caring, thoughtful individuals who will shepherd the future.

Hollie A. Lemkin is an Orange County, California family lawyer who handles international child-custody disputes. Her practice also includes all other aspects of marital dissolution, including spousal and child support, parenting plans, post-judgment modifications, and move-aways/relocation challenges; paternity; domestic violence; and same-sex marriage issues. She has earned the Certified Family Law Specialist (CFLS) designation, the highest level of legal competence in her field that the State Bar of California confers. Lemkin’s background as a corporate business executive taught her the skills necessary to negotiate exemplary marital settlements for her clients. For more information, contact our office today or go to Law Offices of Hollie A. Lemkin.